5 Best Ways to Prevent Rust From Getting Worse

Despite your best efforts, there are times when you might still notice that rust has formed on your car, your tools, or your boat. You know that if you don’t take some kind of action that it will only get worse, because once rust has formed on a surface, it not only spreads but it also becomes more concentrated. If oxidation has already formed somewhere on your car, it will quickly devalue your vehicle when it comes time for a trade-in, and if you leave the oxidation untreated, it might very well degrade the condition of the vehicle, so as to affect its operation. So what can you do to prevent rust from getting worse?

How Can I Prevent Rust From Spreading and Getting Worse?

If you have some serious rusting on your vehicle, you’re probably better off to work with a professional so as to have the oxidation removed. This is especially true if you suspect that any section of your car might need to be replaced. If the damage isn’t quite so extensive as that, you may be able to manage it yourself, so that no further spreading of the damage will occur. Here are some different products and approaches you might want to consider. With no types of acid included in its formula, Magica Rust Remover is safe to use on any surface you care to for the prevention of rusting, and to inhibit its spread. Its fast-acting formula allows you to apply it, then just wait while it penetrates, and then wipe away all the oxidation with some ordinary water. Obviously, this involves far less manual labor than grinding or sand-papering, and a good deal less time as well. On top of all that, it’s extremely effective, so you could hardly make a better choice. If you don’t have any rust-inhibiting products around the house, and you’re determined to get rid of rusting so it won’t spread, here’s a good approach. This will only be effective on a small, localized area of corrosion and not a really widespread area on your car. First, take some sandpaper and file down the oxidation, being careful not to touch the good metal underneath. Then wash off all the tiny debris particles and wipe the area down with a moistened cloth. After that, apply a corrosion-inhibiting primer and when it dries, you can just spray-paint the affected spot with a color matching your car’s original shade. 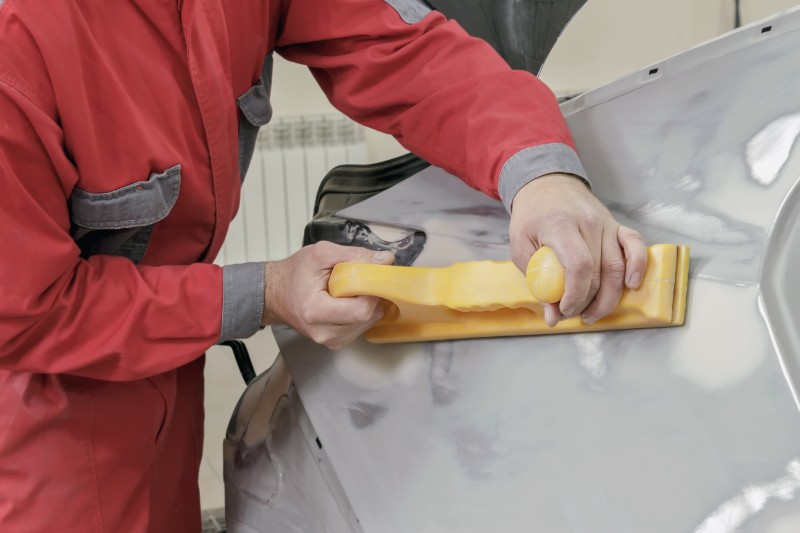 It can be very helpful to periodically perform some routine maintenance on your car so as to prevent the spread of oxidation. Particularly after your vehicle has been exposed to water in the form of rain or snow, you should take some time to wash your car and make sure to clear away all the grime underneath the car which may have accumulated. You should also clear away any water which collects at the drain holes on door bottoms and rocker panels since these are prime areas for water buildup.

Scale rusting is what forms after initial oxidation has become more advanced and results in a bubble, which will eventually flake away to expose more metal surface. That newly exposed surface will then also become rusty, and the process will continue all around your car if left unchecked. To stop this development in its tracks, use a wire brush to remove it, then grind down the rough surface with a grinding wheel, and use sandpaper to achieve a smooth surface. Then apply a primer and a matching coat of paint to the area to completely recover the spot. If you aren’t particularly adept at grinding and wire-brushing, you may simply want to use a rust-inhibiting product which will get rid of the rusting for you all on its own. There are two primary components to this formula, one which neutralizes the oxidation itself, and another which acts as a kind of primer on the metal surface. After treating any affected surfaces, you’ll have the option of re-painting it or just leaving it as is, relatively safe from further incursions of oxidation and corrosion.

Preventing the spread of corrosion on your boat or on your car is of prime importance, if you wish to preserve the good looks of your vehicle, and to prevent any damage from occurring on surfaces. Contact us today at Magica Rust Remover, so you can get the best product on the market today for rust removal and for the prevention of spreading when dealing with oxidation or corrosion.